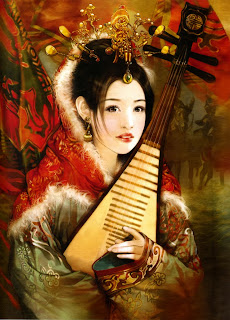 The Emperors of China were quite notorious for their lavish lives, especially when it came to the sheer number of court ladies in the palace. The number 3000 was but a representation, in fact during the reign of Emperor Xuan Zong (Lady Yang's husband), it is said that he had 4 million ladies in the palace! Well, with such a staggering number, it was really hard to get to know them all personally. Besides, the camera was yet to be invented. But Emperor Yuan of the Western Han Dynasty(206BC-8AD) had just the perfect solution for it.

He employed artists to draw portraits of the beauties, which would be presented to him. He would then select whom to favour based on the portraits. It was the perfect chance for the artists to earn a fortune. The palace ladies, eager to win the emperor's favour, bribed the artists so that they could be painted in a more flattering manner. Talk about manual photoshop.

Things were going great for the artists, that is, until Wang Zhaojun came along.

The actual name of Zhaojun was 'Wang Qiang'. She was brought up in a prominent family in Baopin village, Zigui County (now in the province of Hubei). Her father was quite elderly when she was born. Having obtained a daughter at such an old age, he was extremely happy and treated her as the 'pearl in his palm'. (Chinese saying for precious daughter) As Zhaojun grew up, her beauty was much renowned in her province. She was selected to enter the imperial palace. However, with so many beauties selected from all over the country, she also had to resort to the 'portrait procedure' before she could meet the emperor face-to-face.

Wang Zhaojun was confident about her looks and talents. Besides, perhaps she had that streak of righteousness in her. She refused to resort to low-handed bribery to have those extra strokes added to her portrait. Naturally, the artist who was in charge of painting her, Mao Yanshou, was infuriated. He did have those extra strokes added all right--but all in the wrong places. And when the emperor saw her portrait, he casually shove it aside. (Or perhaps he had never viewed it at all) According to popular belief, Mao Yanshou had added a mole to her face. The Ancient Chinese believed that certain moles were inauspicious, and in Wang Zhaojun's portrait's case, people believed that such a mole might cause one's husband's death.

And so, Wang Zhaojun spent several years in abject solitude, living her life in obscurity.

Perhaps her entire life would had turned out that way, if a certain political situation had not happened. During that time, the leader of a Xiongnu tribe, Huhanye Chanyu (Chanyu meaning leader) came to the capital of China to meet the emperor. The Xiongnu were nomadic people who were a nuisance to China at points of times due to their sieges and attacks. This story has to be re-winded a bit, to the time of Emperor's Yuan's predecessor, Emperor Xuan. There was a civil wall within the Xiongnu itself, with five leaders fighting against each other. Huhanye was defeated and sought refuge beneath the Chinese Empire. He became the first Xiongnu Chanyu to do so, and the emperor was extremely pleased, and even relieved his people's famine by sending grains. The emperor also directed two generals and a million soldiers to escort Huhanye back to his homeland.

After Huhanye became the main Chanyu, he returned to China, and requested to Emperor Yuan to become a Imperial son-in-law. In other words, he wanted to marry a Chinese princess.

Now, let's imagine what thoughts were running through the emperor's mind at that time.

Emperor:"Hmm...marry a princess? Seriously? Well, I will just send him a nice palace girl and treat her like a princess. Oh wait. A plain-looking one will do just fine."

The time of departure neared. Wang Zhaojun was summoned to court and met the emperor face-to-face for the first time.

The emperor looked at her. And he stared.

She was so exquisitely beautiful, so much more than all the other court ladies added up together. He had spent his life searching for such a rare beauty, and there she was, sitting in his backyard all along and he never even discovered her. The emperor looked at the portrait, which was really a dreadful representation of her.

The Xiongnu Chanyu was delighted, but the Chinese emperor wasn't. He ordered all the artists to be executed for their trickery.

The emperor felt deep regret for selecting her to marry the Chanyu. However, as a man of trust, he dared not substitute Wang Zhaojun with someone else, and he had to let her go.

Wang Zhaojun left China and began her journey on horseback to her new home. Legend has it that when she was leaving her homeland, she was overcome with sorrow and strung a woeful tune on her pipa. When the wild geese flying ahead heard the tune, they turned and saw such a beautiful woman sitting on horseback. Overwhelmed by her beauty, they forgot to flap their wings and plummeted to the ground.

The Xiongnu people received Wang Zhaojun with delight. She was styled 'Ninghu Yanzhi', 'Ninghu' meaning 'Pacifying the Hu people' and 'Yanzhi' meaning 'Consort of the Chanyu'. The Chanyu cherished her deeply, making her his favourite. They had two sons and a daughter together, one of the sons being Yituzhiyashi. After Huhanye Chanyu died, his son by his first wife succeeded him. As required by Xiongnu customs, Wang Zhaojun married him, despite the fact that this was against Han customs. They had two daughters together.

Wang Zhaojun's political marriage to the Xiongnu tribe brought upon many years of peace for both sides. However, there was a rebellion in China by Wang Mang in the later years. The Xiongnu tribe did not recognise him as the emperor of China, and so they besieged the border lands of China. Wang Zhaojun was heartbroken to see the peace she had established crumble. She died and was buried at a tomb in Inner Mongolia, which is reputed to be covered with green grass all year and hence also nicknamed 'The Green Grave'. However, certain sources claim that it is not her actual grave, and her actual burial place as well as her exact date of death is unknown.

Wang Zhaojun is often pictured alongside Xishi, Diaochan and Lady Yang as the 'Four Greatest Beauties of China'. Her beauty is further remembered with her contribution to the peace between the Han dynasty and the Xiongnu tribe. She is often depicted in paintings as a beautiful lady in a red, fur lined cloak, carrying a pipa.

Countless poems, plays, movie dramas and even a relatively modern song has been written about her. In short, she is one of the most celebrated Chinese women in history.

However, sometimes I wonder--if Wang Zhaojun had been as plain as her portrait, would later generations feel such deep sentiment and sympathy towards her? That, I think, is a question worth pondering upon.

Below is a rendition of the song 'Wang Zhaojun' by the singer Mei Dai. It tells of Wang Zhaojun's emotions during her journey, which include her feelings of homesickness, her longing for her homeland and her melancholic feelings upon viewing the foreign scenery.